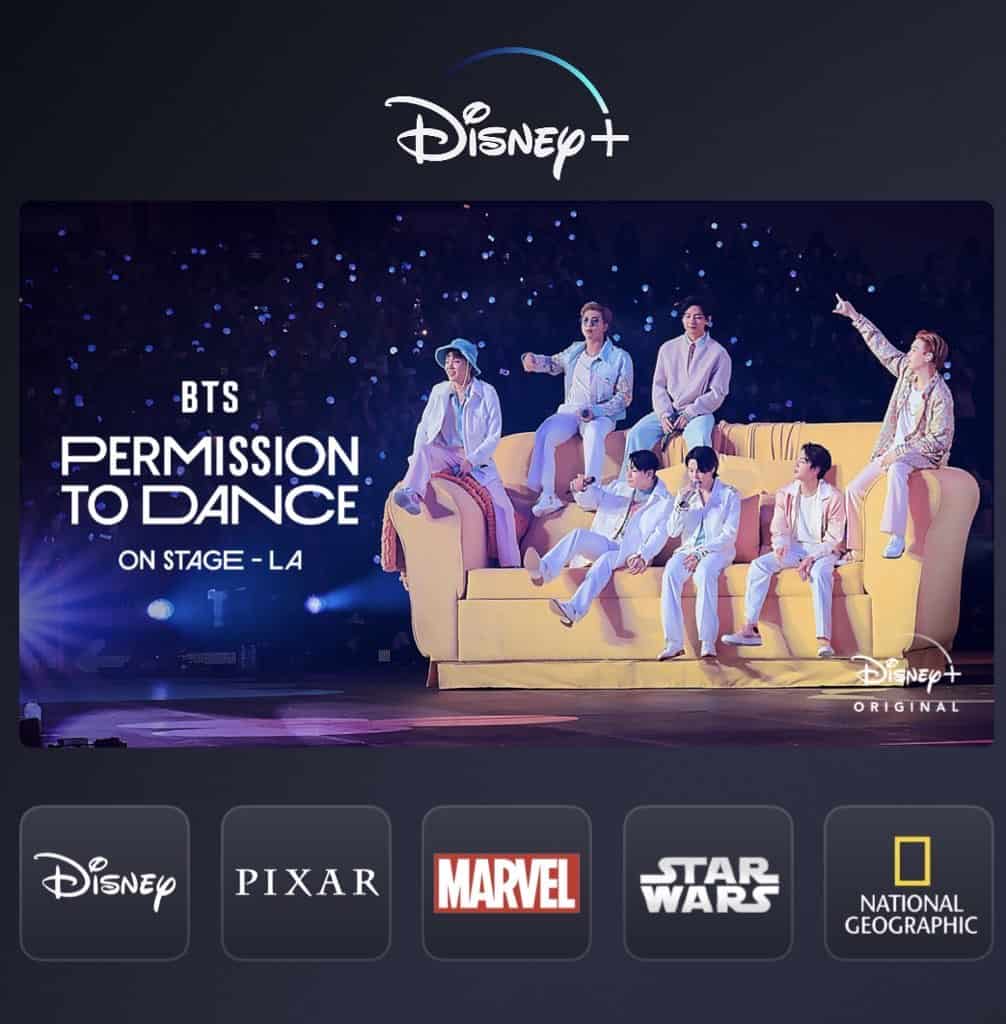 By Timothy L. WhiteSeptember 8, 2022No Comments

Disney+ is getting some surprise new blood — in the form of global sensation, Korean pop (K-pop) boy group BTS, and their hottest new concert film.

The arrival of the K-pop group BTS on Disney+ is not new for connoisseurs. After striking a deal between management company HYBE and The Walt Disney Company, international superstars BTS — whose name stands for Beyond The Scene, Bangtan Boys and Bangtan Sonyeondan (Bulletproof Boys), depending on who you ask — have slowly and steadily made their way into the collective consciousness of many over the past few years with their massive and loyal fans, BTS “ARMY.”

Now Disney+ Day is kicking off with the first item on the agenda – a special concert film from BTS: Permission to dance on stage — LA which will be exclusive to the platform.

Previously the group quoted that their new Disney+ content will highlight “a closer, personal side of us.”

Let’s see what this means for the Disney-owned streaming platform, with the inclusion of BTS and the type of content that comes with them – as well as what other avenues this opens up for the future of Disney+, with their “major expansion into Asian content”.

Needless to say, these seven young men have taken the world by storm, with hits like “Fake Love”, “MIC Drop”, “Butter”, “Dynamite” and the Coldplay collab “My Universe”. And with their inclusion in the Disney+ lineup comes their intensely loyal fanbase, the BTS ARMY.

The official Disney+ Twitter tweeted this to ARMY fans:

Performed in Los Angeles, the Permission To Dance Tour was one of the band’s last live performances, taking place and marking the band’s return to performing for live audiences following COVID-19 – and one of their last. before their current “hiatus” – of sorts.

BTS joining the Disney+ streaming platform will undoubtedly bring in millions – but this gig isn’t all that comes from the BigHit and HYBE-managed boy band.

IN THE SOOP: Friendcation is a new Disney+ series that is a spin-off from BTS IN THE SOUP (roughly translated as “In The Forest”) with V/Kim Taehyung, one of the BTS members and several of his friends. The original, all BTS IN THE SOUP the series featured a rare glimpse of the usually highly stressed celebrities taking a break in a secluded lakeside cabin, where BTS Engage in healing activities like fishing, cooking, camping, recreational sports and, of course, music. This laid-back, slice-of-life series continues with a new group of friends in Friendship, and is already streaming on Disney+.

That’s not the only thing BTS has done, though – and it absolutely sets the precedent for a new style of content coming exclusively from Disney streaming.

The boy band (and media powerhouse) are generally known for producing a whole slew of their own varied content – ​​reality shows like American Hustle Life where they travel to live and work in Los Angeles to learn about rap and culture, to travel docuseries for “young independent travelers” BTS: Bon Voyage, episodic game shows and comedy content in CLASSES! BTS. These were previously hosted on other platforms such as YouTube, Line’s V-App and WeVerse operated by HYBE. BTS has even produced full length movies and documentaries, burn the stage, bring the souland break the silence showing intimate behind-the-scenes looks from their international arena and stadium tours – which could inevitably move to Disney+ too, alongside the already confirmed new behind-the-scenes documentary from Disney+ Original beyond the star it’s on the horizon.

Overall, it looks like Disney+ is diversifying in terms of audience and trying to fill different niches, especially with new content focused on the Asia-Pacific region.

Disney’s Media Acquisition Of BTS Could Mean A Season 3 Of IN THE SOUP all seven members being exclusive to Disney+, or even an entirely new episodic show or movie. Maybe a new season have a nice trip, or something exploring BTS’ hobbies or creative process – there’s a wealth of possibilities here. Exact information about the planned Disney+ content has yet to be revealed.

Check out the band discussing their Disney+ future here:

Much like other Disney acquisitions like Marvel Studios and star wars – we can only make educated guesses as to where Disney will take BTS, their unique form of entertainment, and of course, their ARMY fans.

This could certainly open the door for more international or K-pop-centric content (along with other HYBE-managed music acts) to head to Disney’s streaming platform.

Are you a BTS fan? Would you be interested in seeing more of this type of content from Disney+? Share your opinion in the comments below!