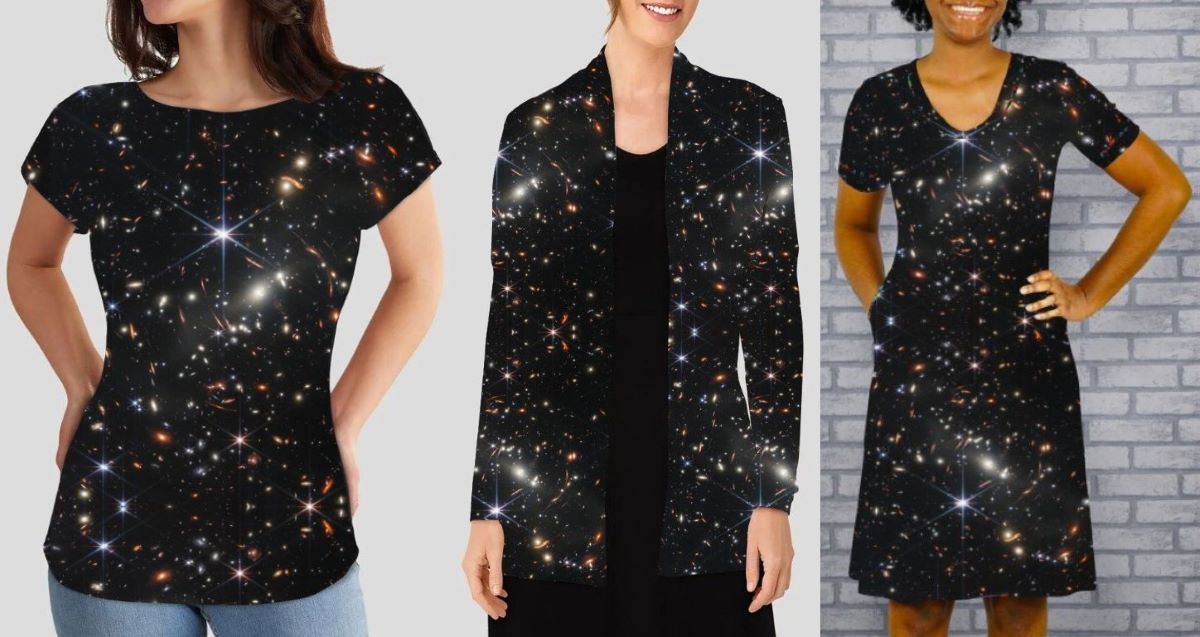 We’ve been covering Svaha USA since its debut in 2015 with a Kickstarter that raised $30,000; It all started when founder Jaya Iyer wanted to create a gender-neutral STEAM kidswear line after realizing the mismatch between the clothes her daughter wanted to wear and the clothes marketed to young girls.

Over the next seven years, Jaya expanded her brand into adult fashion STEAM (which stands for science, technology, engineering, arts and math), with clothing lines inspired by everything from suffragettes to a Fibonacci sunflower in honor of Ukraineto their most recent collection, outfits inspired by images from the James Webb Telescope. The adult clothing line is actually more profitable than the children’s clothing line, with Svaha’s designs appealing to teachers looking to bring out the Mrs. Frizzle in themselves while providing a unique visual for their students when they explain different processes. In fact, she says many design ideas come from these clients.

“Recently I collaborated with a woman who is a biomedical engineer and we did a dress and…she was so happy to do this with us…fashion is something she’s never done before,” said Iyer in an interview with Mary Sue. And she is right. People are finally starting to accept that science and fashion are not exclusive to one gender, but are careers and hobbies that can and should be pursued by everyone.

Of course, when the James Webb Telescope images were made public, loyal Svaha customers came calling. “By the time we saw the images, we were already designing…customers were contacting us asking when we could put them on a t-shirt,” Iyer said when asked about the creations of James Webb.

But it’s about more than pretty pictures; for Iyer, it’s about having a piece of scientific history with you, being proud of the nerdy part of yourself and showing it in public.

She said perhaps her favorite part of Svaha USA is seeing how her designs bring joy to her customers. “They tell me how when they’re wearing my clothes, they get pulled over two or three times a day by strangers who like patterns,” she said. This is especially important for women in male-dominated fields, like coding, as it can help them find other people who share their interests. People say you dress for the job you want, and even if you have the job you want, reminding yourself of the value of your work can be affirming.

The brand does good in other ways as well; Svaha USA also works with many charities, donating proceeds from certain designs and working with groups and individuals to create designs to raise awareness for causes. Iyer told a particularly interesting story about a dragon boat rowing team of breast cancer survivors and designing a shirt for them that donated part of it to cancer research. breast, how even though it doesn’t technically fit into STEAM, it still works to show. They also had a neurodiversity-themed t-shirt that supported autism acceptance and worked with the Society of Women in Engineering and Childhood Cancer Research. Gestures may seem small, but small things can make big changes, as Svaha USA and the programs it supports show.

When asked if and how the world of STEAM fashion has changed in the years since she founded her company, Iyer noted how it has arguably become mainstream. “The success of my business proves that something was missing in the market,” she said. “Today, if you walk into a store like Target, you’ll see girls [STEAM] clothes, but they don’t go as deep as I do. Yes you will see space themed designs, something beyond princesses and butterflies…but no one makes them for women…they stick even more to t-shirts than dresses…I do imprinted with geometry and mitosis.

In many ways, it reminds me of women’s geek fashion before her universe; before Her Universe showed the fashionable side of geekdom, most nerd clothing available for women was graphic tees, some of which weren’t even cut for women. But since then, there has been a women’s revolution showing that not only are we geeks and scientists, coders and mathematicians, but also that we are proud of it through the clothes we wear.

Jaya is certainly right about the importance of specificity and creativity; while Target does carry STEAM clothing for girls, it’s largely generic NASA brand shirts. Svaha USA has an extensive catalog of STEAM apparel that spans many specializations including space, chemistry, physics, biology, zoology, art, language arts, history, mythology, and science. architecture. There’s something for everyone, and they’re growing all the time.

It has also become a kind of family business. Iyer’s daughter, for whom she designed the space shirts, now also joins her mother’s company, designing her own outfits for the brand based on her interests, such as Under the Sea and Piano, in addition to the modeling for her mother’s business. She herself still decides whether she wants to be an artist or an architect.

When asked what she would say to her past, Iyer admitted, “I had a lot of doubts at first, failed business attempts before, if you really believe that something is needed, something is missing at all industry, just believe, you have to try because you will never know. If I had given up, I wouldn’t be where I am today.

Much like many of the works of people that form the basis of her clothing line, Jaya Iyer shows how you can change the world and make it a little brighter. Staying the course in the face of adversity is a challenge, but it’s a challenge she overcame, and thanks to her and other independent fashion brands like Svaha USA, they’re changing course for anyone who wants touch the stars.

—The Mary Sue has a strict commenting policy that prohibits, but is not limited to, personal insults towards somebodyhate speech and trolling.—

Do you have a tip we should know? [email protected]