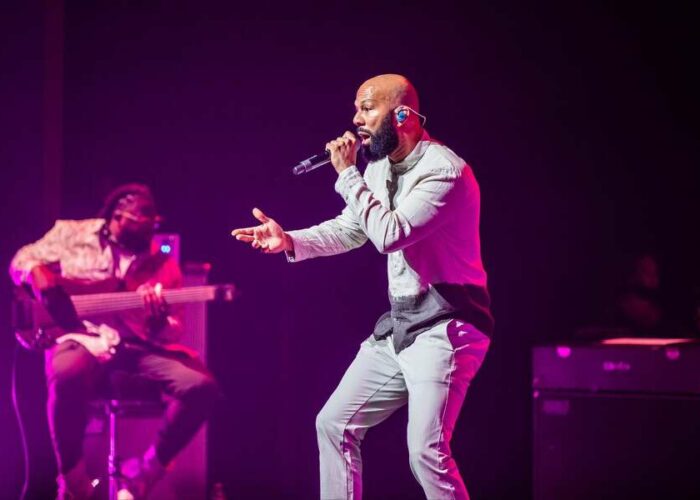 By Timothy L. WhiteAugust 1, 2022No Comments

Common performs with the Houston Symphony

For the Houston Symphony, summer means reaching new audiences. A few weeks ago, that meant free concerts at the Miller Outdoor Theater and its Neighborhood series, as well as tributes to Led Zeppelin and Whitney Houston. Over the weekend, it was Grammy- and Oscar-winning rapper Common who electrified Hobby Center (the orchestra’s temporary home) without a shred of novelty.

When Common appeared with the symphony in September 2019 – making history as the first rap artist to join the orchestra on stage – it was for a single show; this time it was two. In truth, the evening was more like a joint performance featuring a large symphony orchestra.

With one notable exception — his gospel-soaked Oscar winner, “Glory,” which escalated a mountain of emotion at the concert’s climax — it probably would have sounded great without the orchestra. However, the additional musicians thickened the sound during Common’s more kaleidoscopic songs and added welcome elements of dramatic tension at crucial moments. Plus, they seemed to be having a lot of fun.

Because Sarofim Hall is less inclined than Jones Hall, the orchestra was somewhat obscured by the dim lighting, and Common’s formidable backing band spread from left to right across the stage: bassist, keyboardist, drummer , DJ, backing vocalist, flautist and guitarist. The symphony was also silent for about half of the numbers, often leaving Pops principal bandleader Steven Reineke watching in awe from the podium.

Dressed in an all-white ensemble that grabs the spotlight, Common opened with a new song, “Imagine,” from last year’s “A Beautiful Revolution, Pt. 2.” On the group’s fuzzy R&B vibe, he calls upon “heights of patience just to heal a nation” while exploring a handful of favorite themes: positivity, anticipation, and the transformational properties of music: “Imagine if you could change the world through song. ”

However, Common also sees the world as it is and excels at granular stories of street life. In “The Corner” and “The Food,” two of many tracks from the set of “Be,” produced by Kanye West in 2005, the orchestra wavered here and there as Common recounted the characters and struggles of his Chicago native with dizzying detail. “Testify,” a gripping one-player courtroom drama, escalated into a frenzied rendition of Prince’s “Darling Nikki.”

Other parts of the show took on a laid-back beatnik vibe. Already one of the most poetic rappers to hold a microphone, Common delved into the ancestry of speech during the thoughtful “Young, Gifted, and Black,” and extolled the virtues of John Coltrane on the highly syncopated “Black Is”. His band was locked in all night, deftly sliding from serious jazz to 70s soul to the broken heart of Donny Hathaway’s “Little Ghetto Boy” and the frenetic Afrobeat of “When We Move.” (Bassist, Houston’s Boom Bishop, got a lot of love from his hometown thanks to the sold-out crowd.)

However, Common is perhaps at his best rapping about rap itself, both on “Love of My Life” and “Used to Love HER,” love songs that equate hip-hop fandom with female company; and the immersive “Universal Mind Control,” another kinetic experience that allowed the orchestra to pick up their collective beat as Common indulged in a bit of break-dancing. (It is good!)

He also didn’t overlook his softer side, the silky Romeo behind “Come Close” and “The Light.” Asking for a female volunteer he could approach (“respectfully”), at one point he invited a young lady from Katy named Laurel onto the stage and serenaded her by freestyling an impressive array of H-Town: Third references. Ward, Fifth Ward, Acres Homes, Astroworld, Celebration Station, Turkey Leg Hut, Frenchie’s, The Breakfast Klub, Pappadeaux’s. Three guesses what else Common likes to do when he’s in town.

Chris Gray is a Galveston-based writer.