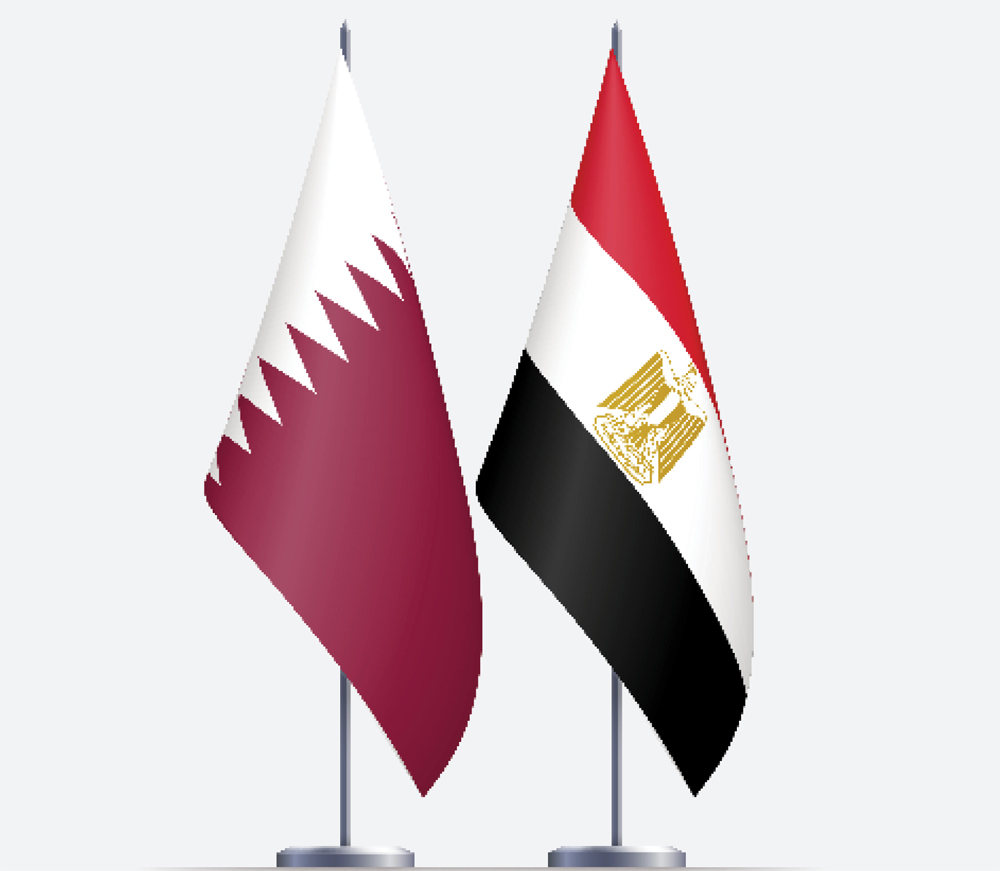 Motivated by a common will, Qatari-Egyptian relations aim for broader horizons

By Timothy L. WhiteSeptember 13, 2022No Comments

The visit of the President of the sister Arab Republic of Egypt, HE Mr. Abdel Fattah El-Sissi, to the State of Qatar comes within the framework of the growing good relations between the two countries and their brotherly peoples, and as an affirmation of the mutual interest and the common will of the leaders of the two countries to develop and strengthen these relations and to advance them towards broader horizons in various fields.

The visit of HE the Egyptian President to Doha is of particular importance in terms of timing, as it comes before the launch of the Arab League Summit in Algeria scheduled for November and the 77th session of the United Nations (UN) General Assembly in New York. It also coincides with a number of accelerating international developments, notably with regard to the situation and developments in the Middle East and the war in Ukraine. These developments necessitate increasing and intensified consultation and coordination between the two countries regarding all developments and various issues affecting Arab security, aspirations and legitimate rights of brotherly Arab peoples, to achieve Arab unity and security and stability. regions, as well as serving Arab interests and positions. in various forums and boosting their immunity amidst all the challenges and dangers.

President El-Sisi’s current visit to Doha and the talks to be held there constitute a promising new phase and an important milestone in the course of bilateral relations between Doha and Cairo, and promote them to the level of promising and fruitful partnerships in serve the common interests of the two countries and brotherly peoples and the higher interests of the Arab and Islamic nations.

Qatari-Egyptian relations are rooted in a firm belief in unity of purpose and common destiny, and in the significant strategic dimension and weight that the two sides represent for each other. Bilateral relations are also based on deep and sincere historical ties between the two countries and their brotherly peoples in several political, social and economic sectors. The first Ambassador of the State of Qatar to the Arab Republic of Egypt presented his credentials in 1972, and the first Ambassador of the Arab Republic of Egypt to the State of Qatar presented his credentials the same year.

Over the long history of relations with the Arab Republic of Egypt, the State of Qatar has been keen to build these relations on mutual appreciation and respect given Egypt’s prestigious value based on its long history. .

Relations between the two countries are governed by a number of agreements and memorandums of understanding which cover the political, commercial, economic and labor sectors as well as the promotion and protection of mutual investments in addition to air transport, youth, sports, education, science research, media and cultural fields and cultural and archaeological cooperation.

Qatari-Egyptian relations are experiencing a movement of active contacts and mutual visits with the aim of strengthening them for the benefit of the two countries and peoples, and supporting and activating the mechanisms of joint Arab action. On June 24, His Highness the Amir Sheikh Tamim bin Hamad Al-Thani visited the sisterly Arab Republic of Egypt at the invitation of his brother President Abdel Fattah El-Sisi. During the visit, the Emir and President El-Sisi held an official session of talks at Al Ittihadiya Palace in Cairo, which focused on relations between the two brotherly countries and ways to strengthen and develop them. in various fields, in particular in the fields of investment, energy, defence, culture and sports. The talks also touched on a number of topical issues in the regional and international arenas and exchanged views on them, especially the developments in the Middle East region.

The visit of His Highness the Amir to the Arab Republic of Egypt was a milestone in the course of relations between Doha and Cairo, and opened new and broad horizons for the development and strengthening of bilateral relations to cover broad political, economic and other areas. and problems, and to promote joint Arab action, especially in the face of current challenges facing the region and the world.

On March 29, a meeting was held in Cairo between the Prime Minister of the Arab Republic of Egypt HE Dr. Mostafa Madbouly and the Deputy Prime Minister and Foreign Minister HE Sheikh Mohammed bin Abdulrahman Al-Thani, and the Minister of Finance HE Ali bin Ahmed Al Kuwari. During the visit, they discussed bilateral relations and the importance of strengthening cooperation and coordination in various fields. The two sides welcomed the formation of a joint high committee led by the foreign ministers of the two countries to continue consultations and strengthen cooperation and coordination in all fields.

As part of strengthening bilateral economic and investment cooperation, the two sides highlighted an agreement on a package of investments and partnerships in the Arab Republic of Egypt, totaling 5 billion dollars over the coming period.

At the same time, in Cairo, a meeting was held between the Deputy Prime Minister and Foreign Minister, HE Sheikh Mohammed bin Abdulrahman Al-Thani, and the Foreign Minister of the Arab Republic of Egypt, HE Sameh Shoukry, which focused on bilateral relations and the importance of strengthening cooperation and coordination in various fields. Both sides commended the work of the members of the joint bilateral commissions, through which a number of agreements and memoranda of understanding were sealed, and consensus was reached on the topics on their agendas, d in a way that serves the interests of both brotherly countries and peoples.

The Qatar-Egypt Follow-up Committee held its seventh meeting in Doha in September last year, and the Qatar-Egypt Legal Committee held its sixth meeting on September 13-14 last year in Doha. These meetings resulted in agreement on many topics on the committee agendas and the signing of a number of bilateral agreements aimed at strengthening cooperation and coordination between the agencies involved.

This approach is part of the strengthening of cooperation and coordination relations between the two countries.

This comes amid consultations between the two countries to expand and increase investment in new areas including energy projects, increase the volume of trade, and facilitate and remove barriers that hinder mutual investment.

While attending the Qatar Economic Forum Powered by Bloomberg in June, the former Minister of Commerce and Industry of the Arab Republic of Egypt, HE Nevin Gamea, discussed with the Qatari side investment opportunities in the field of manufacturing, specialized industries, textiles and leather industries as well as a kind of partnership between the two parties, and said that the two parties communicate to finance the opening of the capital of Egyptian companies to the Qatari business sector .

In June, the Qatar Businessmen’s Association discussed with the CEO of the Egyptian General Authority for Investment and Free Zones (GAFI), Advisor Mohamed Abdel Wahab, during his visit to Doha, promoting investment cooperation between the two countries. Both parties agreed on the importance of coordinating field visits by the Qatari business community to Egypt to discuss investment opportunities on the ground.