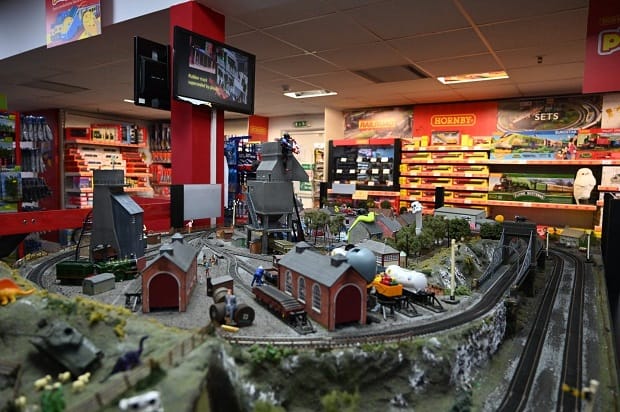 Hornby Hobbies, based in Margate, has secured a £12m injection from Secure Trust Bank Commercial Finance.

The combined facility funding is split into two for accounts and one for inventory.

Scalextric and model railway giant, founded in 1901, returned to Margate in early 2019.

The company had sold its Margate site for £2.25million following a move of distribution to Hersden in 2014 and office functions to Discovery Park in 2015. The moves marked the end of 60 years in Margate.

A management overhaul in 2017 resulted in the decision to bring offices and a new showroom back to the city.

Marketing director Simon Kohler, who began his career with the company in the early 1970s at the Margate site, said at the time that it was a return to the true “home of Hornby”.

Hornby is now based alongside Locomotive Storage Limited, who bought the site after the model business left.

Locomotive Storage provides storage for locomotives and rolling stock, such as the Bittern, and is developing a museum of British railway heritage.

The toy giant employs over 200 people globally, with offices based in the UK, Americas, France, Germany, Spain and Italy.

Hornby managing director Lyndon Davies (pictured) said: “The past few years have been transformational for Hornby. Our priority has been to keep the business on track and to thrive for the millions of collectors and enthusiasts around the world.

“Since welcoming our new management team, we have expanded our workforce, improved our market knowledge and established partnerships with top manufacturers.

“The support we’ve received from Secure Trust Bank should prove invaluable, and this new facility will help us continue to create timeless products that our customers love. Their commercial finance team took the time to fully understand our business needs, which made the process quick and easy. »

Tony Young, London and South East Regional Sales Manager at Secure Trust Bank Commercial Finance, added: “It has been a pleasure working with Hornby and getting to know the management team.

“Hornby is a household name and the success of recent years reflects the hard work and dedication of his team. With this facility in place, Hornby can continue to thrive and invest in a legacy that began over a century ago.

History in a jar

The roots of Hornby Railways date back to 1901, when founder Frank Hornby received a patent for his Meccano construction toy. The first clock train was produced in 1920 in Liverpool.

In 1938 Hornby launched its first 00 gauge train. Production was suspended in 1942, during World War II. Production resumed after the war but did not reach full capacity until 1948.

In 1964 Lines Bros Ltd, the parent company of rival Tri-ang Railways, purchased Meccano Ltd. and merged Hornby and Tri-ang into Tri-ang Hornby at the Margate site. The older Hornby line was discontinued in favor of Tri-ang’s less expensive plastic designs.

The Tri-ang Group was disbanded in 1971 and Tri-ang Hornby was sold to Dunbee-Combex-Marx, becoming Hornby Railways in 1972.

Hornby Railways became independent in the 1980s. Production continued at the Ramsgate Road factory until the 1990s when manufacturing was moved to Asia and the old factory became a warehouse.

In July 2010 the Hornby Shop And Visitor Center opened. In June 2013 the company announced that it was moving its warehouse to Hersden, near Canterbury, and in May 2015 the other sections of the company moved to Discovery Park.

A senior management restructuring in 2017 led to the welcome return of Hornby’s offices to Margate and the creation of a new showroom alongside Locomotive Storage who bought the site when Hornby moved.