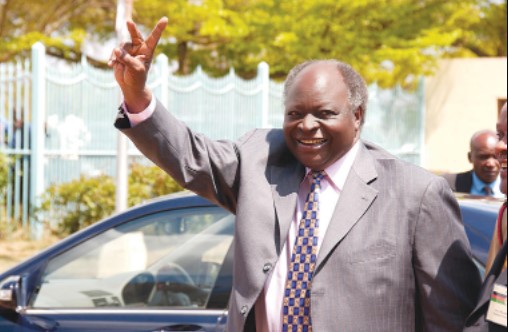 Kibaki, whose cause of death has yet to be established, was Kenya’s third president.

The head of the civil service, Joseph Kinyua, said a funeral steering committee, made up of his family and government officials, has already been formed.

In his honour, Uhuru ordered that his motorcade and those of the Vice President, Chief Justice, Speakers of both Houses of Parliament and all diplomats not fly the Kenyan flag until Mwai Kibaki is buried.

From massive infrastructure development projects to humorous rebukes to people he disagreed with, the former head of state is still considered by some to be one of the “coolest” presidents in the world. Kenya.

Although his reign was marked by political tensions stemming from the post-election violence of 2007/08, Kibaki sometimes softened the situation with lighthearted moments and banter.

Growing up, young Kibaki lived an ordinary life as a child. He studied at Gatuyaini for two years before going to the Karima Mission School. He then joined Mathari School (currently Nyeri High School) between 1944 and 1946, where he learned carpentry and masonry. He then went to Mangu High for his O levels.

Before joining the London School of Economics where he made history as the first African to graduate with a top-notch degree, Kibaki worked for an oil company after his dream of joining the military was thwarted.

A teacher and economist, the former president married Lucy Wambui, daughter of a religious minister. Lucy was then a secondary school principal. They had four children.

Before joining politics in the 1960s, Kibaki worked as an assistant lecturer at the Makerere University School of Economics.

He was first elected to Parliament in 1963 as Member of Parliament for Donholm (now known as Makadara) constituency.

He had previously served as the fourth vice president of Kenya for ten years from 1978 to 1988 under President Daniel Moi.

Although many thought he was low profile, Kibaki once called a press conference to deny reports that he was having an illicit affair. “I want to make it very clear that I only have one dear wife, Lucy, who is here, and I don’t have another,” he told a conference of television press in 2009.

The presser was assisted by the first lady, Lucy, who stood by his side.

Kibaki was also known for swiping his political opponents with his classic “bure kabisa” comments.

Although he avoided naming his rivals directly in his tirades, he made sure no one doubted who his beards were for.

The government also introduced free primary education which aimed to eradicate and combat poverty as well as improve the standard of living of the people.

Known for his opulence, he owned extensive landholdings and had interests in hotels, insurance, and agriculture. Kibaki also loved his sport, especially golf.

The former president will be granted a state departure with full military honors.