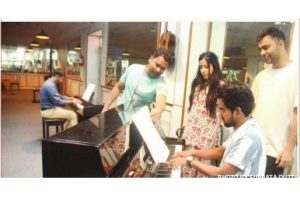 In June, Delhi’s hot weather recreation season begins. At the end of the exams, the children begin to think about hobbies they can pursue during the summer holidays.

This year’s holiday came after two years of Covid. Alert parents therefore quickly go back and forth to places where their children can learn a craft or an art. Among the most popular are the National School of Dramatic Arts (NSD) Summer Theater Workshops.

The First National Drama School in Bhagwan das Road, near Mandi House, pioneered the workshops it is currently conducting in several schools in Noida, Ghaziabad, Gurugram and Delhi.

She has already selected several batches of children for her Theater in Education (TIE) Sanskar Rang Toli. The children were grouped according to their age in several other theater workshops in the city. Parents feel relieved when their wards’ names appear on the lists of selected children. The demand for such short-term acting classes has been high for years, but the pandemic has given it a serious setback. Some institutions have designed online courses for children to continue the programs.

The workshops were highly appreciated for the development of the children’s personality and the improvement of their power of expression. Many parents spend several hours in the morning away from the workshop premises to pick up their children immediately after a day of sessions.

As the weather turned pleasant after a night of rain, the New Delhi YMCA’s “Y School of Music” near Parliament Street received many curious children. The Y music school has been offering guitar, violin, piano, keyboard and drum lessons for 20 years. Children take lessons in Western instrumental music for leisure or professional purposes.

Syed Sajjad Rasul, the school’s famous piano teacher, organizes public performances where young pianists can show off their talents. He said the school runs exams through Trinity College London, which also issues certificates. During the days of Covid he took classes online and the option is available even now.

An addition this year is Western vocal music. The music school received students from as far away as Panipat and Nainital. Music lessons are also available in several localities.

Children can go to these neighborhood recreation centers on their own and easily return. A flyer circulating in one community offered “day care” for younger children, as well as instrumental training, as well as popular vocal music competitions on television.

Pawan Bhargava of Darya Ganj’s Bhargava’s Music, the largest store of Indian and Western musical instruments including pianos, guitars, saxophones, violins and their accessories in the capital, said there was good taking instruments this season, after Covid.

Many buyers learned and then shared their creativity on the net. In this way, they were recognized for their speech and also earned money. The most popular instrument with young buyers was the guitar, followed by keyboards. The number of customers had increased as several schools offered Western and Indian music lessons. The students had to buy the instruments to practice at home. Many of them took additional courses with professionals and became teachers themselves!