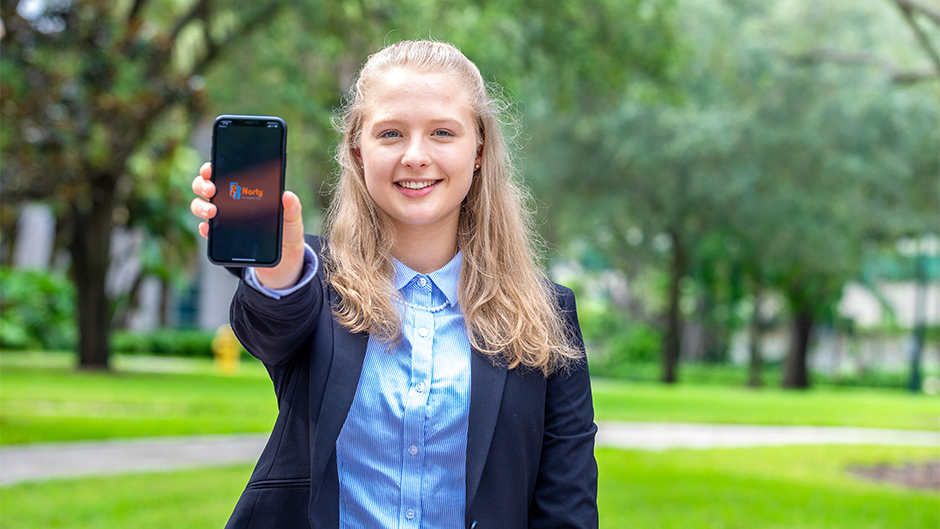 
After three years of living in her off-campus building, Catherine LaSpina realized she hadn’t had time to meet a single person. Today, she has a bit more free time as she nears the end of the MD/MBA dual degree program at the University of Miami Patti and Allan Herbert Business School and the Miller School of Medicine.

“I’m interested in the intersection of business and medicine, and I’m intrigued by tech startups and how medical product development works,” said LaSpina, an Ohio native. “I think intellectual capital is often siloed within medical communities because a lot of doctors have great ideas because they see how to improve their practice, but then they’re very busy and don’t have the business acumen to translate their ideas into marketable products.”

LaSpina’s interest in business led her to develop a mobile application named “Narty – The Neighbor Party”. Downloadable from the Apple Store, Narty helps users easily meet neighbors in their building or dorm who share common interests. In just a few steps, users can find a workout partner, sports fanatic, or even another working mom who is interested in play dates.

“Narty has two main features for meeting your neighbors either by joining interest groups exclusive to your building or by being mutually exclusive,” LaSpina said. “This app creates real communities of people and facilitates tangible human connection.”

The journey leading to the release of his passion project was supported and aided by various university departments. LaSpina credits The Launch Pad and Miami Herbert Business School as “instrumental” in his journey to creating and implementing Narty. She recently won capital funding for her company in college and at the eMerge Pitch Night competition and met with Brian Breslin, director of The Launch Pad, on several occasions to cultivate the app.

“Everyone at UM has been very helpful,” LaSpina said. “Breslin has helped with some financial models and things like that for the pitch competitions I’ve entered.”

LaSpina recently placed in the top five at SPARK Hollywood, a pitching contest presented by the Greater Hollywood Chamber of Commerce and the City of Hollywood. Although she didn’t earn any seed money this time around, she was grateful to gain experience and gain recognition for her app.

Prior to enrolling in the University, LaSpina said she was excited to pursue the joint degree program as it prepared her for a future as a physician, while teaching her the intricacies of management, leadership and corporate policies. Although the number of students enrolled in the program is small – there were five students last year – the knowledge she has acquired is enormous.

“The intersection between business and medicine is becoming increasingly important, and being able to go to business school and medical school was perfect for me,” LaSpina said.

Growing up, LaSpina’s parents inspired her and her siblings to be their own boss, but also to pursue an education.

“My parents are business owners and neither of them went to college,” she said. “They really built their business from scratch, so they’re very supportive of me pursuing this.”

From clubbing to plant parenting, Narty has interest groups for everyone, and LaSpina encourages fellow ‘Canes with access to the Apple Store to download the free app. Now in her final year of medical school, Shea is applying to residency programs while continuing to build Narty and spread awareness of the app.

LaSpina has already completed the requirements for her MBA program and will soon be graduating from medical school. She is interested in how health policy, health administration, and innovative healthcare startups can shape a better healthcare system.