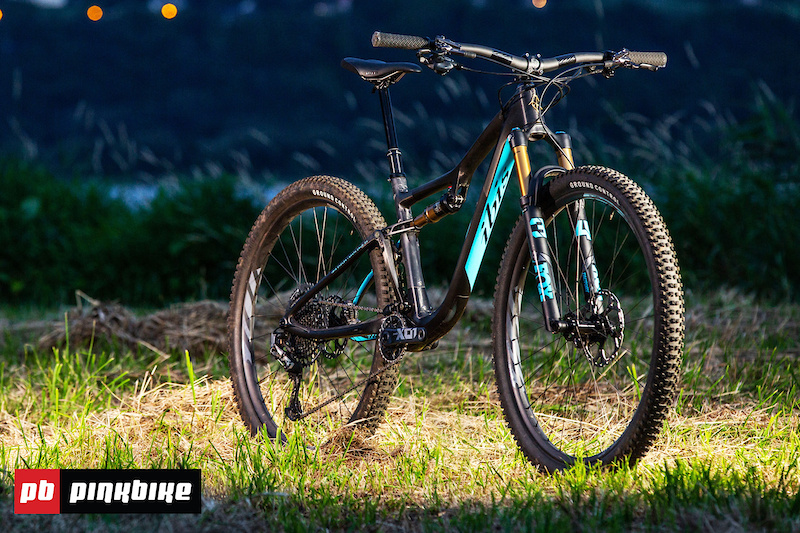 Field Test: Ibis Exie – Ready for your next XC race

Words by Sarah Moore; photography by Tom Richards
Ibis introduced the Exie just over a year ago, just in time for its 40th anniversary. The 29″ carbon cross-country bike is built in a factory near the brand’s headquarters in Santa Cruz, Calif., and already has multiple podiums under its belt after a first season on the World Cup circuit under the direction of Jenny Rissveds.

While some of the bikes we tested in Quebec lean more towards the trail side, the Exie is aimed at cross-country racers with its 100mm of rear travel. However, it is definitely part of a new generation of more capable XC bikes, as that 100mm rear travel is paired with a 120mm fork and 67.2° head tube angle.

The SRAM X01 build we tested features a Fox Factory Series 34 Stepcast fork with a Fit 4 shock and Fox Float DPS rear shock. The suspension is controlled by a handlebar lockout. Stopping was done by Shimano’s XT brakes and the size medium we rode came with a 160mm Bike Yoke Revive dropper that cleared the saddle nicely. We tested all of these bikes with Control tires, but it’s worth noting that the Exie comes with Maxxis’ wider-than-usual Recon Race 2.4” tires.

Trailforks regions where we tested

The Sentiers du Moulins trail network was just one of five trail networks we explored on the Ibis Exie. Filled with long exposed bedrock, a healthy dose of machine-made and naturally flowing technical trails, this area surprised us with all the hidden gems on either side of the valley.

We took in the views and rock work on Lynx Ridge, before descending the fast and flowing Maelstrom, which had tons of berms and rollers to traverse.

Just by looking at this XC whippet and its spindly rear triangle, you’d expect the 100mm of rear-wheel travel to get up and go. And get up and go! The first ride I did on this bike was on the Mont-Sainte-Anne World Cup cross-country course, and I had forgotten how steep and demanding it is. I was really glad to have this bike by my side for tight corners and steep sections with questionable traction.

The Exie comes with a 50mm long stem, which is on the short side for a complete cross-country race bike, and which, together with the steep angle of the head tube, makes it easy to change gears. direction quickly and choose the best line of ascent. . I felt the Exie really put me in an ideal position to put power to the pedals on the climbs. While it doesn’t have size-specific basics, the size-specific seat angles should mean that more riders also feel like they’re in that optimal climbing position.

As for the suspension, there is a kind of magic with the DW link suspension and it takes advantage of the Exie’s short travel and allows you to solve the trickiest puzzles on technical climbs. The Exie powers up hills without sapping energy, but when you make a mistake or get pulled off the line, the suspension forgives the mistakes and allows the rider to keep making progress. There’s definitely more to the Exie than just a raw carbon gloss finish and a low number on the scale.

While the Exie is forgiving on the climbs, it pays to be careful when you start descending. Due to the steep head angle (compared to other bikes we’ve tested) and relatively short stem, it feels like the front wheel is more under you than on some of the other less gear-focused bikes. race we had in the mix in Quebec.

That being said, it doesn’t seem tricky and mistakes can be made without disastrous results. The frame is a comfortable ride, and the traction we noticed going uphill also exists on the descents. It’s just that the geometry is definitely happier on sections of trail that aren’t too steep and it takes a different level of focus to make the bike work for you.