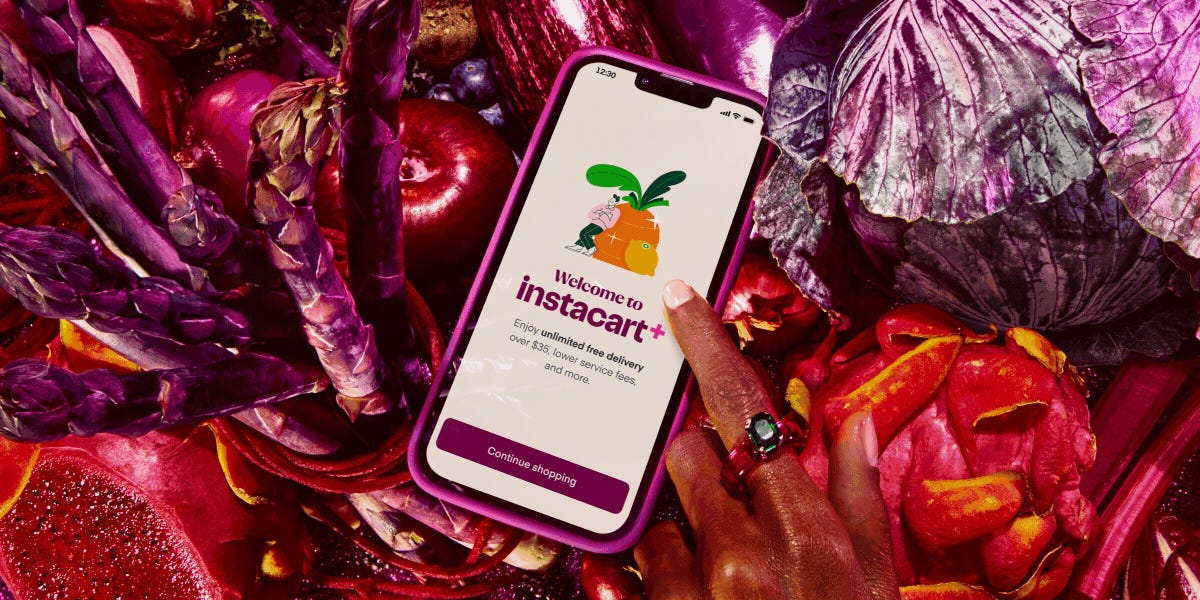 Instacart is gearing up to go public, making new revenue streams more important than ever for the grocery delivery startup.

The company plans to go public by the end of the year, the Wall Street Journal reported on Thursday, citing anonymous sources. Although the Journal reported that Instacart was profitable in its second quarter, the newspaper described the plan as “a bold move in one of the slowest years for IPOs in over a decade.” .

The company has launched projects and added services to its offerings over the past two years in an effort to grow its business. Many of them, such as advertising and smart carts, take it into areas far beyond its core delivery business.

Among its latest additions is a revamped version of its Instacart Express subscription service called Instacart+, which shows that the company wants to encourage customer loyalty.

In March, the company announced a “platform” of services for retailers, including ad options and micro-fulfillment centers that it is launching in Publix stores in Georgia and Florida.

It’s a recognition that Instacart needs to do more than manage an army of on-demand worker shoppers to be successful, said Alex Frederick, senior venture capital analyst at PitchBook.

Instacart’s core grocery business is “just not a viable long-term model,” he said, adding that while many grocers turned to Instacart after the Whole Foods acquisition by Amazon and during the pandemic for a quick way to get online, the cost of using the startup makes it a money-losing proposition for most customers.

Some retailers, like Kroger, have created their own delivery and e-commerce tools, Frederick said.

Instacart’s response has been to move to an a la carte model offering grocers a wider range of services beyond just delivery. “It allows grocers to choose whatever capacities they want, and ideally at a profit,” he said.

Even Fiji Simo, CEO of Instacart since August 2021, acknowledged that the company needed to do more than deliver.

“While we expect a continued increase in online grocery adoption over the next decade, we know that many consumers will still want to shop in-store,” Simo told Insider in December.

“As a result, retailers and brands will be increasingly incentivized to create unified shopping solutions that break down the silos between their in-store and e-commerce solutions,” she added.

instagram confidentially filed an initial public offer in May.

Here are the main ways Instacart tries to diversify its business.

Users get free shipping on orders over $35 and discounted shipping. Buyers can also share benefits with other members of their household, for example by creating a common shopping list. Instacart hopes to keep members engaged, especially as they become more price-conscious thanks to inflation.

The service is valid for orders from a variety of retailers that Instacart works with, from grocers to Sephora and Office Depot.

Instacart subscribers are “among the company’s most engaged customers,” Instacart said when announcing the service. These shoppers spent on average about twice as much as regular customers in 2021, the company added.

Instacart has been developing its advertising business for about two years. The division allows brands to place their products in front of customers as they scroll through and add to their virtual cart.

Insider reported last year, citing people familiar with the matter, that this business was worth hundreds of millions in 2020 and could generate as much as $1 billion in 2022.

This spring, Instacart announced Carrot Ads, which allows retailers to start their own advertising business.

Jonah Ellin, chief product officer at 1010Data, a retail data analytics firm, said expanding brand advertising was “the most logical part” of the platform’s announcement. form of Instacart this spring since the company already has a developing advertising business.

But he added that the fact that Instacart runs its own advertising business could make it difficult to sell that capability as a service to retailers.

“I’m not entirely sure retailers are going to see Instacart as that value-added partner you want to trust for your customer loyalty,” Ellin said.

While it’s too early to tell how Carrot Ads will fare, Frederick told Insider that brands’ ad dollars will likely grow in importance for Instacart.

“It’s the online version of an end cap in the grocery store,” Frederick said. “It’s a really powerful place, and an important place, where we’ll see a lot of food companies putting their money.”

Retailers such as Kroger and Albertsons as well as fast delivery startups are also trying to expand their advertising business.

Laura Kennedy, an analyst at CB Insights, said standing out from these rivals and attracting enough consumers to Instacart as demand for delivery declines will be key to the company’s growth.

“Before the pandemic, I think there were a lot of questions about the long-term viability of Instacart,” Kennedy said. “So it’s not a magic bullet in any sense of the word.”

Another part of Instacart’s new platform is Carrot Warehouses, a division that works with retailers to set up fulfillment centers instead of picking items off store shelves.

Instacart said it is open to creating different types of warehouses with its retail customers.

“Some partners will want stand-alone facilities that we operate and manage, and others may seek to co-locate the Carrot Warehouse in their existing physical location,” Instacart said when announcing its platform in March.

Several startups have offered warehouse technology to grocers for years, including Fabric, which announced a partnership with Instacart last year.

Frederick said Instacart could, however, offer a more comprehensive package to grocers.

“It would be potentially difficult for a grocery store chain to build their own automated fulfillment center and have the software to run it,” Frederick said.

But Instacart itself isn’t a big name in warehousing, Ellin said. He pointed to Ocado, the online grocer that built its UK business by developing its own automated warehouses and struck a deal in 2018 to build similar facilities in the US for Kroger.

“It’s harder to see how Instacart’s package comes together because they haven’t really done that before,” Ellin said.

The first test of Instacart’s new warehouse strategy is taking shape at two Publix grocery stores, one in Miami and the other in Atlanta. Both stores will offer 15-minute delivery of select items from small warehouses.

The super-fast delivery promise is similar to startups such as Gorillas, Jokr, Gopuff and Getir, which grew rapidly in 2021 but struggled in 2022 as many laid off employees and others closed their businesses completely. doors.

Instacart told Insider that its approach is different since it works with existing grocers instead of competing with them.

But Frederick said that with investor and consumer interest in superfast delivery waning, the approach has become less attractive.

“It looks like Instacart has been working on this model for a while and was doing it while there was this huge, exuberant interest in this model,” he said.

“But I think it remains to be seen whether this is really a viable model,” he added.

Elline agreed. “It’s really a want, not a need,” he said.

Caper AI and a smart cart

Instacart acquired Caper AI for $350 million last October. The startup makes payment technology for online and in-store use, including a smart shopping cart that it touts as an alternative to Amazon’s.

Customers using the shopping cart can scan products as they shop, then skip traditional checkout when they’re done. The startup said it wanted to eliminate scanning altogether, a change that would put its technology on par with Amazon’s shopping cart.

Kroger and Caper worked together on a similar cart before Instacart acquired Caper. Now Kroger is trying to roll out a cart to its stores through a partnership with rival startup Veeve.

Ellin said digital cart screens could both help consumers find products in the store and provide another medium for advertising.

There’s also a more obvious use: “Get out of the store quickly and painlessly,” he said.

Frederick said the cart could also speed up order picking, either by Instacart employees or customers. But he added that it was unclear whether the smart trolley would become a staple for going to the supermarket.

What Caper’s acquisition shows is that Instacart is trying to be a “one-stop shop for grocers looking to take their businesses into the next century,” he said. “Looks like they cover all the bases.”