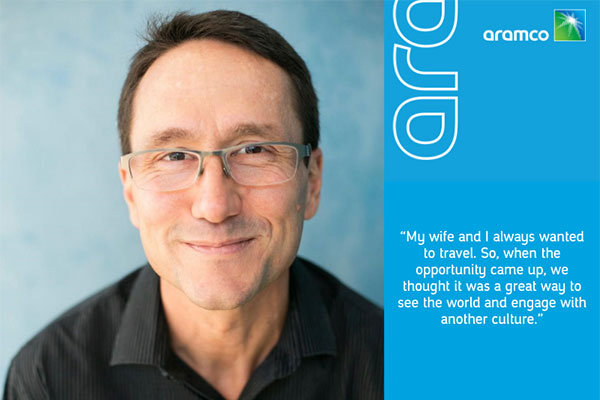 Todd began living as an expat in Saudi Arabia in 2008, when he moved from Texas with his wife and three children.

Back then, they were looking for adventure, an attractive benefits package, and a more practical lifestyle for their busy family.

Looking back, he said their expectations had been more than met.

“My wife and I had always wanted to travel. So when the opportunity arose, we thought it was a great way to see the world and engage with another culture,” he said. “I have friends from all over the world here. My closest friends come from South Africa, Scotland, Nigeria, the Bahamas and, of course, Saudi Arabia.

A lifestyle change was also part of the draw.

“At Aramco, you can get home from work in five minutes, then change clothes and go golfing, biking or mountain biking right after. I can easily dedicate an hour a day to a hobby without feeling like I’m falling behind at work,” he said. “When I was in Houston, it took an hour to get to work, and then if our kids had after-school activities, we would drive everywhere and be exhausted by the end of the day.”

Life in the Udhailiyah community suited her family perfectly.

“I’ve always wanted to have a good work-life balance, so when I started thinking about how this setup would be good for me and my family in the long run, it started to make a lot of sense. “, did he declare.

Her children, now in boarding school in the United States for high school, went to Aramco-run schools that went through 8e-note with their community friends, who felt safer than most places at home.

“Before, we just let our kids go out the front door and play outside whenever they wanted, no worries,” he said.

He also found that extra vacation time gave him the opportunity to connect more intentionally with friends and family, and to see more of the world thanks to Saudi Arabia’s proximity to Europe, India. Asia and Africa.

Most expatriate employees and their children take two to three trips a year, usually at Christmas, during spring break and during the summer.

On a recent trip to the United States, he and his wife stopped in Holland for four days to cycle through the countryside during tulip season.

“What’s interesting is that we see grandparents more and our children develop a relationship with them, more as expatriates than when we were in the United States, because in the United States it is difficult to get away from the daily routine. With the repatriation benefits, you can have real downtime for family vacations,” he said.

A former high school science teacher, Todd spent four years in Houston with Aramco Americas after his first stint in Saudi Arabia, where he worked on petroleum engineering projects. He developed his expertise in coiled tubing, completions and well intervention while working at oil service companies that provided services to Aramco in Saudi Arabia.

He returned to Saudi Arabia in 2018 because he loved the work, his colleagues and the lifestyle.

He is now back in a teaching role, acting as supervisor of the team of technical advisors who provide training to all new recruits who work in upstream production engineering. He has 22 people in his team, who give courses and work on integrating new technologies and analysis tools into the curriculum.

He and his wife now live in a residential enclave in Dhahran and have started playing pickle ball, in addition to pursuing their other hobbies.

To explore our opportunities, visit www.aramco.jobs/rigzone.